导读：Yesterday, the annual Computing Conference had its opening ceremony at the International Exhibition Center, Hangzhou Cloud Town. In the four days, there were over 450 speeches delivered, tens of thousands of square meters new exhibitions displayed. This was the largest cloud Computing Conference.

Yesterday, the annual Computing Conference had its opening ceremony at the International Exhibition Center, Hangzhou Cloud Town. In the four days, there were over 450 speeches delivered, tens of thousands of square meters new exhibitions displayed. This was the largest cloud Computing Conference. 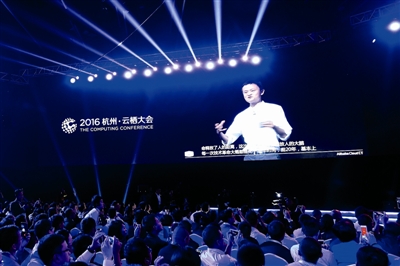 Jack Ma, the chairman of Alibaba Group; Guo Taiming, the CEO of the Foxconn Group; and Michael Widenius, the founder of MySQL will attend the conference as panel speakers. Some cooperation programs in the fields of IT and scientific research were announced.

The Computing Conference had been held 7 sessions, with over 40,000 attendees this year. The conference has become an emblem of the world’s cloud computing industry.

The success of the conference is a key-hole image of the rising cloud computing industry in Hangzhou.

In recent years, Hangzhou has put the development of cloud computing on top of its agenda, making it the technological support for the six essential constructions of the city by designing and building the creation platforms such as the Cloud Town and the Cloud Valley. At present, the cloud computing industry in Hangzhou is leading in the province and the country, by housing the giants of the industry, Alibaba, NetEase, Hikvision, the Huasan Communication Company Ltd., to name a few. They have taken the advantageous positions in the domestic Big Data industry. Among others, Ali Cloud has grown into China’s biggest cloud computing platform, leading in the world as well. The cloud platforms run by the Wasu media and the Hikvision video are also growing quickly.

Cloud computing in Hangzhou is definitely promising. As it is planned, by 2017, 2-3 leading companies, including Ali will be hatched into the internationally known companies with the capacity of tens gigabytes level cloud computing, and 200 more medium and small sized companies will be in the Cloud Computing and the Big Data services. This will bring about an extra 100 billion yuan income to the communications technology.

In the evenings of October 13 and 14, a concert, which was said to have been tailored for programmers, and a 5km night run will be on.

More than two months ago, Ali Cloud, together with multiple music platforms, posted a list of songs that top programmers must have, which were said to be the best tunes to hear while encoding.

At 7:30 pm, October 13, a concert that was said to be loved by the programmers was staged. This time the musicians and the songs were all chosen by the artificial intelligence. The Ali Cloud engineers created the music style and artists beloved by the technology indoorsies via the Big Data.

In the evening of October 14, 400 joggers will ran in the 5 km fluorescent night race in the Cloud Town. Every runner will wear a Bong 3HR intelligent motion wrist band, which will synchronize the runner’s “vigor index” on a huge screen, indicating the runner’s age, running speed, height, heart rate and weight. The index data flow will be visualized into a moving picture, illuminating the night of the Cloud Town.